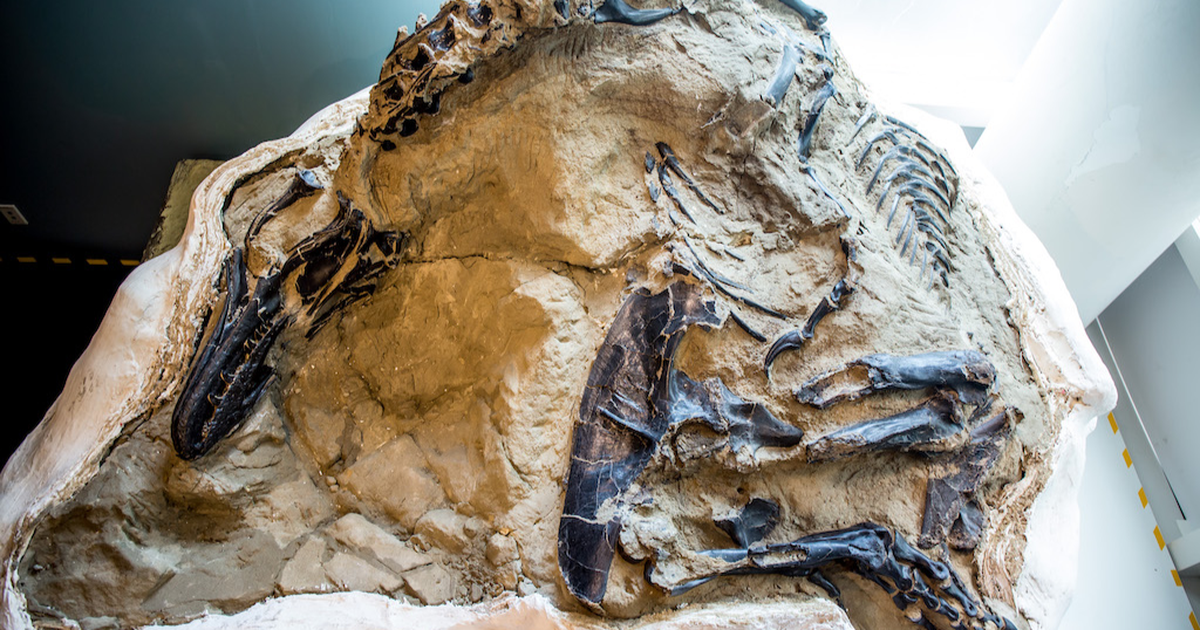 The impressive and dramatic fossil specimen still only partially uncovered from its surrounding sandstone includes a tyrannosaurus rex and a triceratops, and it will be going on display at the North Carolina Museum of Natural Sciences, The Charlotte Observer reported Tuesday.
Injuries and tyrannosaur teeth found embedded in the triceratops' body suggest that the two were involved in a predator-prey scenario when they were preserved together, according to the museum.
The two skeletons are among the best-preserved examples of each species, and the T. rex's skeleton is the only example of a 100 percent complete specimen ever unearthed.
The specimen includes the best-preserved skeletons of Triceratops and T. rex to date.
We'll have the only 100% complete skeleton of T. rex ever found.
Through this gift, our world-renowned researchers have access to rare biological data typically lost during preservation.
The fossils show incredible features like body outlines, skin impressions, soft tissues, injuries and more, to ensure decades of research.
pic.twitter.com/oNU8h7XRBp — NC Museum of Natural Sciences (@naturalsciences) November 17, 2020While the fossils are only just now heading to the North Carolina Museum of Natural Sciences for display, they've been unearthed for a while.
They were discovered on a Montana ranch more than a decade ago, The Charlotte Observer reported, by amateur paleontologist Clayton Phipps and his team.
Eventually, for a price of $6 million, the dinosaurs were freed from storage.
The display of the dueling dinosaurs will be a bit unusual.
As they're still largely covered in sandstone, visitors to the museum will be able to see researchers slowly and meticulously uncovering the fossils live, another fascinating layer on top of an already impressive specimen.
Source