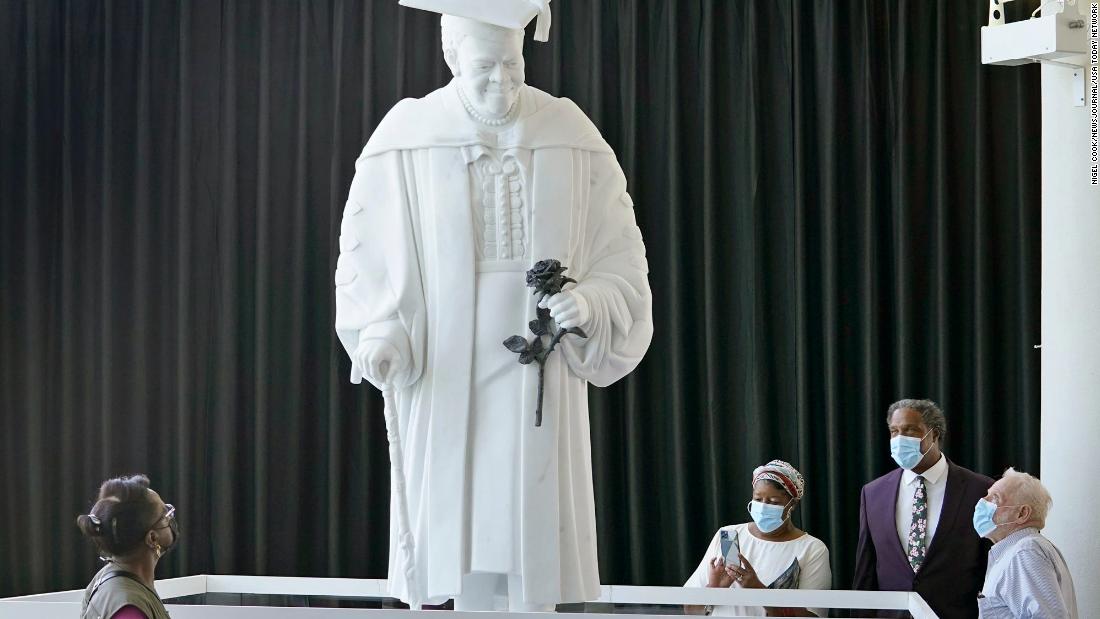 (CNN) A larger-than-life marble statue of civil rights pioneer Mary McLeod Bethune is replacing one of a Confederate general in the US Capitol's Statuary Hall.
The daughter of former slaves, Bethune became an influential Black educator and civil and women's rights leader.
The 11-foot-tall statue of Bethune was unveiled Monday in Daytona Beach, Florida, which Bethune called home and is home of Bethune-Cookman University.
The statue will be on display in Daytona Beach through December before it makes its way to the US Capitol in early 2022.
"I'm third-generation from Daytona Beach, Florida.
His grandfather, a local car dealer for decades, was active in civil rights and befriended Bethune, he added.
She fought for civil and women's rightsMary McLeod Bethune stands with the U.S. Capitol in the background, circa 1950.
In 1904, she created Daytona Beach Literary and Industrial School for Training Negro Girls.
Her life's work is an inspiration to Nancy Lohman, board president of the Dr. Mary McLeod Bethune Statuary Fund, Inc."Dr. Bethune was an amazing trailblazer," Lohman told CNN.
Bethune's statue was years in the makingMaster sculptor Nilda Comas stands her statue of Mary McLeod Bethune on October 11, 2021The journey to recognize Bethune in this way began in 2016, Lloyd said.
Bethune would not be in statue form if it hadn't been for the Dr. Mary McLeod Bethune Statuary Fund, Inc.
The money went toward the marble statue, as well as a bronze statue that's been slated for a new riverfront park in Daytona Beach, Lohman said.
Source