Michigan DUI child endangerment attorney Paul J. Tafelski releases a new article (https://www.michigandefenselaw.com/mi-owi-dui-lawyer/child-endangerment-attorney/) explaining DUI/OWI child endangerment laws in the state of Michigan. The lawyer mentions that under Michigan law, driving while impaired and with a child under 16 in the vehicle is a criminal offense called child endangerment. The potential consequences of this charge is more enhanced compared to that of a regular DUI.

“According to the Centers for Disease Control and Prevention, 1.9 percent of surveyed adults reported driving after drinking too much. Recent data from the Insurance Institute for Highway Safety shows more than a quarter of all drivers who die in crashes in the United States have a blood alcohol content (BAC) of 0.08 or higher. In 2017, 19 percent of traffic fatalities of children age 14 and younger occurred in alcohol-impaired driving crashes,” says the Michigan DUI child endangerment attorney. 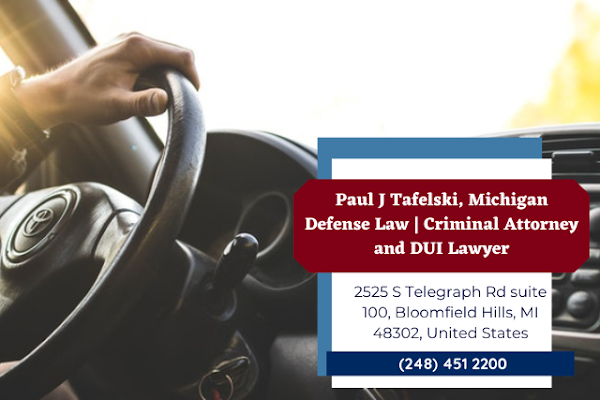 The lawyer says that the first-time conviction of child endangerment related to DUI is a misdemeanor. The penalties for this charge may include a fine of $200 to $1000, 30 to 90 days of community service, revocation of driver’s license, and five days to one year in prison. If a person repeats this offense within seven years, they may pay up to $5000 in fines, imprisonment of up to five years, 180 days of community service, and a lifetime of driver’s license revocation.

Attorney Paul J. Tafelski explains that placing a child at risk for harm is considered child neglect. Child Protection Laws govern cases involving child neglect and it states that these cases must be reported to the Michigan Department of Child Protection Services. There is a social stigma about undergoing investigation by CPS and it can also impact a parent’s custody or visitation rights.

Lastly, the lawyer emphasizes the importance of having a skilled defense attorney when facing charges of child endangerment related to DUI. Having an experienced attorney may be able to help the defendant understand their rights and protect their freedom.

Michigan Defense Law is a firm that takes the presumption of innocence very seriously. Every client deserves competent legal representation. No matter if someone is facing a felony or misdemeanor charge, the lawyers at Michigan Defense Law will work hard to vigorously defend the client and achieve the best outcome for them. Call Michigan Defense Law today at (248) 451 2200 to schedule a consultation.

Maryland Roofing Contractor Has Been Listed On Porch

McHenry Roofing Gets Listed on Porch

Hacks To Save Money On Family Holidays by Australian Business Weekly