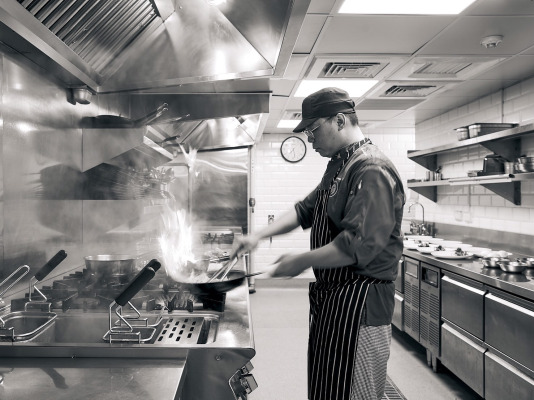 JustKitchen, a cloud kitchen startup, will start trading on the Toronto Stock Exchange (TSX) Venture Exchange on Thursday morning. It is doing a direct listing of its common shares, having already raised $8 million at a $30 million valuation.

The company says this makes it one of the first—if not the first—cloud kitchen company to go public in North America. While JustKitchen launched operations last year in Taiwan, it is incorporated in Canada, with plans to expand into Hong Kong, Singapore, the Philippines and the United States. TSX Venture is a board on the Toronto Stock Exchange for emerging companies, including startups, that can move to the main board once they reach certain thresholds depending on industry.

“It’s a really convenient way to get into the market and with the ghost kitchen industry in particular, it’s early stage and there’s a lot of runway,” co-founder and chief executive officer Jason Chen told TechCrunch. “We felt there really was a need to get going as quickly as we could and really get out into the market.”

Participants in JustKitchen’s IPO rounds included returning investor SparkLabs Taipei (JustKitchen took part in its accelerator program last year), investment institutions and retail clients from Toronto. More than half of JustKitchen’s issued and outstanding shares are owned by its executives, board directors and employees, Chen said.

One of the reasons JustKitchen decided to list on TSX Venture Exchange is Chen’s close ties to the Canadian capital markets, where he worked as an investment banker before moving to Taiwan to launch the startup. A couple of JustKitchen’s board members are also active in the Canadian capital markets, including Darren Devine, a member of TSX Venture Exchange’s Local Advisory Committee.

These factors made listing on the board a natural choice for JustKitchen, Chen told TechCrunch. Other reasons included ability to automatically graduate to the main TSX board once companies pass certain thresholds, including market cap and net profitability, and the ease of doing dual listings in other countries. Just Kitchen is also preparing to list its common shares on the OTCQB exchange in the U.S. and the Frankfurt Stock Exchange in Germany.